#21 by Izakrius
The Death Of Gwydion
Silence hung in the air like a thick fog, choking me and sending cold shivers racing down my spine. The castle was empty, just like everywhere else. Hesitantly, I took a step. My footsteps echoed through the stone corridors, the sudden noise sending rats scurrying out from behind the empty horse stalls and into the many black, damp corners of the castle. I stopped to listen, hoping the noise didn’t draw the attention of anything else. A few moments later, even the soft scratching of the rats running came to rest. Taking a deep breath, I kept going.
I came upon the once-grand staircase, now covered with cobwebs. Empty suits of armor were littered across the floor, the only evidence of the heroes that once called this castle home. It looked as though no one had been here in decades.
Looking around, an odd statue that protruded from the center of the courtyard caught my eye. Its golden sheen drew me inexplicably towards it. I could just make out faint writing at the base beneath a thick layer of dust. A clue to the barrenness of Gwydion? I wiped away the dust, coughing as I inhaled some of the floating particles. “Bounties,” the board read. I began to peruse the listings, scanning for anything that may help me track down answers when a shrill voice startled me from above.
“You won't find anyone here, I’m afraid.”
I jumped with surprise at the sudden noise, my hand instinctively reaching towards the sword at my belt. An old man with grey hair stood at the top of the staircase.
“They’re all gone,” he repeated.
“Who are you,” I managed in reply, hand still grasping the hilt of my sword.
“They called me Fergal the Noisy. But that was many years ago. I’m afraid I’m the only one left now,” his gaze shifted to the floor.
I watched him carefully as he spoke. His faded robes hung loosely off his frail frame. His hands fidgeted with the tassels adorning them. I removed my hand from my sword and approached the man.
“What happened to them all?” I ask.
“The same thing that happens to them all, I suppose.” He heaved a sigh and continued. “Many left seeking greater riches, some for new adventures. A few will come by on occasion but you’re the first I’ve seen in nearly a decade. There’s just nothing left here for heroes anymore.”
The truth of the situation left me unable to speak.
“My advice is to follow them, young lady. You’ll find no companions and no gold here. If you sail west to Epona-”
“No,” I cut in, finding my voice. “I was sent here to help and that’s what I intend to do.”
A faint smile cut across his face. “In that case, I suggest you begin at Heroes Landing. Send ‘em my way if you come across any others.”
Map in hand, I left the castle behind and made my way towards the coast.

#22 by lotherxoxo
This is a story I heard from my grandparents, and they heard it from their grandparents. A tale as old as time itself. A story about a hero. A hero who yet again found himself sitting, waiting, and peeking through the small holes in the walls of Alchemical Quarters' corridors. A place his adventures took him years ago, a place he should have since forgotten. But something kept bringing him back there - a myth. A legend about a mysterious mad sorcerer, bearing the so-called Illusions of the Apostate. An invaluable piece of jewellery that would have made him worthy of joining his comrades in slaying the mighty Dragoness of the Underworld- Dhiothu. He had already massacred thousands upon thousands of sorcerers. Sitting there, bags full of worthless green gems, he pondered whether his mission was futile. He had just slain another pair of insignificant sorcerers, and was starting at the Grom General, whom he had bested countless times before. After minutes of fond remembrance he was again attacked by the passing sorcerers, but something felt different... wrong. This magician’s spells harmed him! Our heroic Rogue whipped around and was met with an unfamiliar sight. He was face to face with Cormac the Deranged. The mage whom everyone told had vanished aeons ago was standing right before him! Within seconds of initiating battle our hero was forced to withdraw. He was unable to combat a power of such magnitude.

Almost defeated, our hero could hear echoes of the fearsome Elf of Alchemical Quarters, affectionately called Dobby, once again holding his poison coated blade, challenging weak adventurers for slaughter with maniacal laughter. After another unsuccessful attempt against Cormac our Rogue fell down once more, gasping, grasping his last resurrection idol. Covered in blood he resurrected, brushed off, drank a cocktail of empowering elixirs and was about to begin his ultimate attempt when he heard the mystical steps of a marvellous spirit horse. He turned around to the looming figure of a ranger clan in the Doch Gul armour our hero only dreamt of. The ranger drew his bow and unleashed a swift combination of powerful shots, winning ownership of the prized bracelet. Our hero, embarrassed, dejected, was never seen again on Dal Riata’s grounds. The explorers who encountered his skeleton, deep within the Dustwhither Catacombs, claimed that his anger and outcries of disappointment and failure could still be felt echoing through the air.

#23 by SanguineParadise
The Heroes of Dal Riata

By now, everybody knows the story of the saviours of Dal Riata.

Those heroes who secured the lighthouse, stopped the Skullcrusher and Connacht invasions, and collaborated to defeat powerful evils, in both the mortal and supernatural realms.

However, isn’t it strange that despite the countless successes the heroes had, they couldn’t stop the Blackstone Cabal from freeing Crom Cruach? It takes 27 heroes twenty minutes to knock out the legendary dragon Dhiothu, but somehow thousands of them could not stop the comparatively weak Cabal members, despite having years to complete that quest?

Sure, Crom isn’t free yet, but according to one of Gelebron’s defective sentinels in the Arcane Sanctum, his release is inevitable. How can those heroes have the audacity to idle in castles and taverns, gambling away their loot and fighting for fun, with the knowledge that the darkest force known to humanity and the gods will soon be free?

During the Trojan War, waged between Ancient Greece and the ancient kingdom of Troy, the Greeks created a huge wooden horse and brought it to the gates of Troy. The Trojans viewed the horse as a peace offering and symbol of their victory, and thus pulled the giant wooden horse into the capital area of their kingdom. 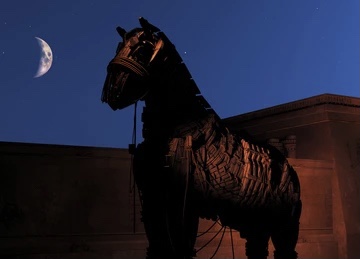 With fearsome foes such as Mordris, the Necromancer, Gelebron, and Dhiothu out of the way, and with the support of the human citizens of Dal Riata through the actions of the heroes, the Blackstone Cabal is in a great position to assume control of Dal Riata, in a chaotic post-Crom world.

It’s said that the same trick never works twice, but the Heroes of Dal Riata are proof that the Trojan Horse worked again.