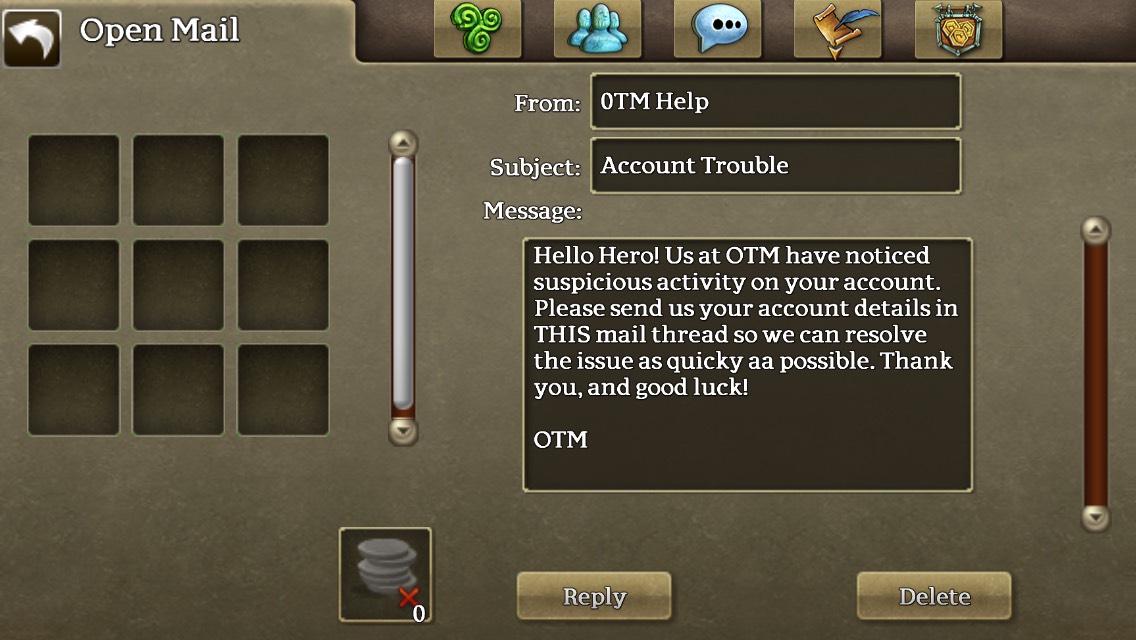 #2 by Difinitus
Hi, thanks for the report. The Support Team will NEVER ask for your password. We don't have the ability to see it and we don't use it as a method of verifying your account.

In the future, please report this kind of stuff to our support team by email at support@onethumbmobile.com or by submitting an in-game ticket (which is the only way to contact us in game)!

Fr xD their Grammer isn't even proper, like it's so sad

#4 by Pekto
Hello.
Today on our server at least two players temporarily lost access to their game characters. It's me (Pectopator) and my friend (Faier Lady). The passwords for access to our game characters have been hacked and changed. At what I discovered a password change only the next time I tried to enter the game. No notifications about the password change were sent to my e-mail until I personally reset the password. Before losing control of my account in the game, the last time I successfully entered the game was at approximately 07:20 (November 14, 2019) by playing time. And I reset the password unknown to me at 09:30 on the same day. During these two hours of my absence from the game, my account was hacked. And if only that. But at the same time, these scammers devastated all my acquisitions. Almost everything that was on the game character was taken from me, emptied my bank and even my wolf (probably my wolf was exchanged for tokens).

My girlfriend suffered a little less. Before she was able to regain control of her account (16:12), fraudsters did not have time to transfer some of the valuable items.
I assume that these scammers act at least two. When I again entered the game after resetting the password, I had a new friend (kaike druid, 80lvl). I don’t remember that I added it to my friends. And someone else constantly offered me trade (tokens, saddle, clothes). And when I left Trade, they offered me Trade again and again. I could not think properly then, because I was too upset. And now I suppose that in this way the scammers swept their tracks (probably they wanted to throw other people's things to me, and my things were thrown to another hacked player before picking them up for themselves).
Can you help us get our things back? For now it’s difficult for us to find in ourselves the desire to play this game further.
I am not sorry for the lost gold and not sorry for most of the lost things. But I had clothes that are in a single copy on our server, rare fishing rings, a rare necklace and a good mount. The loss of other values ​​saddens me, but much less. Because the rest I can earn again. And let the second hacked player (Faier Lady) write about herself (I will give her a link to this topic).

And also I have a question:
Can I change not only the password, but also my login in the game? I equally named my game character and login. Now this is a weak point for those who try to hack me again.

#5 by Pekto
At support@onethumbmobile.com, my friend and I wrote about the problem almost immediately. But the administrator did not answer us.
How to understand whether our appeals to consideration are accepted or not?

#6 by Sulaymon
Has a hacking account! Stole the whole jewelry! I went to the last month very rarely and probably so the thieches decided not to rush to empty my character I managed to restore access to the account and retained part of your things but the alas of money and jewelry I lost hope for understanding developers. Thank you

Fr xD their Grammer isn't even proper, like it's so sad

To be fair....grammer is spelled grammar.

Brevity is the soul of wit so i will talk your ears off.
7 posts
Post Reply

Deytre
Morri slaps. Nuff said.
Sat Feb 22, 2020 1:01 am
Stormrage
Epona the best everyone should transfer epona, and experience true freedom from the evil dom clans on other servers! #e
Sat Feb 22, 2020 12:18 am
Stormrage
Those who wants to have competition and earn their drops thru hard work, go Dom servers plenty to choose from. Those do
Sat Feb 22, 2020 12:14 am
Angmar Reid
Oooh you posted it on forums! First version was great, of course, but I love the new version as well! Yeh, digital ar
Fri Feb 21, 2020 11:53 pm