#1 by simp
Not saying that the new Spectral Mounts aren't cool, but if you've had a chance to see the movement speed, does anyone else feel a bit robbed by the fact that it's only a 3% speed boost? I initially thought that because of its price tag of 256 mount tokens that it would have increased like all the other levels below it and jumped 20% (129% total)..

just wondering what you guys think? 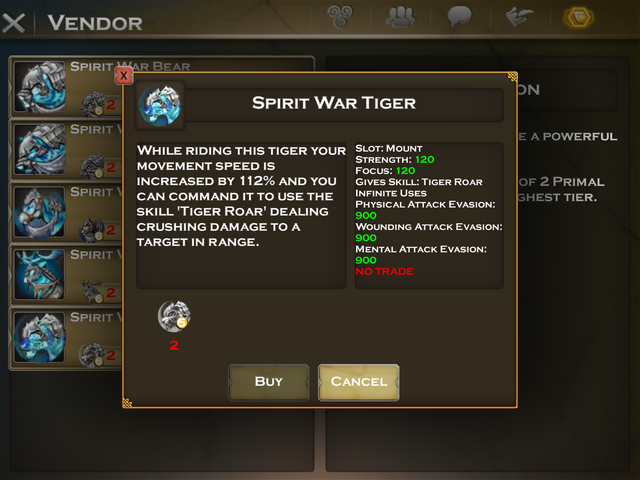 i'm just a hero for fun

#2 by Zkills
Imo, every battlemount besides brown is a ripoff. That’s just me tho
Zkills, Proud general of the beloved KodiakReavers of Belenus, the G.O.A.T clan

Agreed lol. The stat boosts are minimal.... The skill boost per tier is minimal...
Epona:
Yeeticus- Work in progress ranger

#4 by Sgt slotter
I won't be wasting my time with spectral. It's a slap in the face as far as stats are concerned. I do plan on getting the tiger just cuz it looks cool but no way in hell will i invest time or $ into a 3% boost. I work too hard to toss away my pay with that lvl of abandon. If looks are factored in, it's pretty sweet but that's it, it's just shiny.

#5 by Froze
If they made the spectral mounts not disappear on death, it would be better than the way it is now. It would make sense for it not to die on death since it’s already a ghost lol
Last edited by Froze on Sat Nov 10, 2018 10:14 pm, edited 1 time in total.

#7 by Shivahh
256 tokens is way too much, if that's the final decision for live please dont implement it.
Ascension

Perma banned from ch friends band for spamming no u ft. Rogue81 & W7CH

#8 by MMajestixFTW
I was hoping for some massive perk to come with this new level of mounts, but from what I have seen, there is no way double the mount tokens of a max tier battle mount is worth it. This is just my opinion, because if you think about it, you could invest in two top tier level 6 battle mounts, which might be a more useful choice for such a large number of mount tokens (which aren't super common from chests).
FallenStriker (Level 226) Rogue
Minatory (Level 222) Ranger
Voyager (Level 180+) Druid
Server: Gwydion
Clan: Relentless

#9 by Spartacus4406
I really feel that with the increased price that it is perfectly reasonable to ask for these spectral mounts not to need a mount whistle.
IOS player since 2011
Spartan214 Fire Mage of Rosmerta

For Every Idiot There are 5 more idiots
Warsong
Warsong
Chieftain

Shivahh wrote:256 tokens is way too much, if that's the final decision for live please dont implement it.

I agree with this. Is this is what is going to be implemented don’t even put it into live. It’s such a rip-off. For 128 tokens you get 109% 90/90 stats and a skill that hits like 4.8k piercing damage BUT for another 128 tokens you get an extra 3%, 60/60 stats and the skill probably only does like an extra 1k dmg. That sounds like SUCH a rip-off. That will cost 4-18m depending on which server you’re in. I’m REALLY hoping it is immortal and doesn’t die. Idc about stats then. It would make it worth it for sure. You could keep the stats the same for all I care, but if it doesn’t have that and doesn’t get buffed, wait to put it into live after you buff it. No point in putting it into live now. That was a terrible planning job IMO. Lol my server will have like 5 people get that mount. That’s about it.

Solution
-Make the mount immortal or revive with regular idols when toon is revived.
-Buff speed to AT LEAST 125%.
-Skill needs to hit DOUBLE of what it hits now
-Buff stats to 200/200.

I made it in order of importance and best improvement. The reason the stats and skill are 3rd and 4th is because you could argue if those get mad buffs it would be p2w. I’ll get spectral but I have been farming bounty tokens for well over a year. It will only cost me like 1.5m or less to get this mount because of the purple tokens I have.
Songz
My song is what you hear before you die.

Roll Coal wrote: Your servers amazing and you’re the best person to walk the earth.

Users browsing this forum: No registered users and 63 guests