#1 by Dadizbad
Greetings to everyone- I hope this Saturday evening finds everyone safe.

Since this is the "General Discussion" forum, I would appreciate the opportunity to initiate a respectful dialogue on a subject that may be of General interest to other players besides myself.

Specifically, as has been noted by some other players in the Release Notes and also the Feedback commentary, the decision was implemented recently with the current update to revamp the daily rewards, resulting in the removal of Hunters Tokens from the rotation. I would be very interested to know if there are any other players out there who would be most appreciative for Virtual Realms (VR) to reconsider this decision. Similarly, I'd like to know if there are other players who consider this to be an improvement, and if so, why?

I fully realize that this decision affects some players more than others. That said, I can not help but feel that there may be other players who would prefer a return to the status quo with regards to that.

It seems like there is a sentiment among some forum posters that "we should be grateful for what we get", and believe me, I am grateful. Another sentiment appears to be "if we complain, they may take everything away from us". I do not personally subscribe to this idea, since it does not seem to me that any customer-oriented business like VR would equate "customers providing feedback on product preferences" with "complaining", nor do I think it very likely that VR would seek to punish any members of its customer base for providing any well-intended feedback.

Just by way of background, I have been playing this game since 2011. As we all know, there are a lot of competing products on iTunes and the Google Store, but Celtic Heroes remains my "go to" game, and the main thing I enjoy is the many, many excellent people I have met over the years. I wouldn't categorize myself as a "huge" plat buyer, but I've made sure to invest at least twice a year during the double platinum events. In short, I don't claim to be anything special, just a small(ish) but regular financial supporter for a fairly long time, which equates with having at least some "skin in the game" for how "our" game is administered. I get it, nothing is perfect, and given the unpredictable world we are living in today, this Daily Reward thing is pretty small stuff. That said, perhaps VR will be pleased to consider this request.

In conclusion- VR, please bring back the Hunters Tokens to the Daily Rewards rotation.

However this turns out, I hope everyone will accept my best wishes as we roll into the holiday season, and please stay safe and sound. 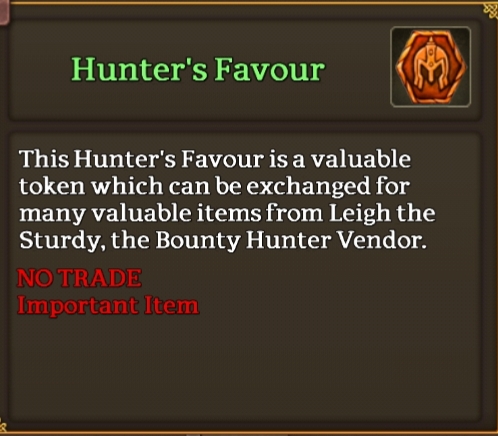 2 free daily quest and the old daily rewards, you can get a lot of hunters favour, but do you think its too much.

Instead of complaining, be thankful of these freebies.
Other games dont give freebies like this.

Thank you for taking the time to reply. I've seen your similar comments on the Patch Notes section and elsewhere, so it seems like this is a matter that is of at least some importance to you as well since you've expended the time and energy to weigh in. That's admirable. I'm not entirely clear to be honest on whether you consider the new Daily Reward rotation to be an improvement or not (and if so, why) but I don't think I am off base when I draw the conclusion that, at a minimum, you want discussion (which I believe you've classified as "complaining") on this issue to cease. So, for the moment we will place you in the category of "in favor of the new rotation".

Thanks as well for pointing out for those readers who may be new to the game that the Hunter's Favour tokens can be amassed by means of the Daily Bounty quests, and by doing the math to show the rate at which they can be accumulated. This is useful. Another piece of math is that (as you know) the former Hunter's Prize reward represents 12.5 days of effort using the equivalency formula for the tokens. In my original post, I on purpose avoided trying to make myself a one-man case study, but perhaps I am not alone in wishing to spend my limited time online helping newer players as a 190 Druid with their efforts rather than chasing the two (or six with Bounty Pledge for sake of completeness since you didn't mention that) Hunter's Favor tokens. But again, spending my play time helping others is just my preference since this is a community-oriented MMO (at least on Lugh).

You mentioned on a previous post that you came to Celtic Heroes in 2015, and the fact that you're still here 5 years later tells me that this game means at least something to you. Enough that you spend time you could be doing something else giving feedback and recommendations (note that I don't say "complaining") on this forum. I think that's an important distinction, since - especially in these times- when we write off other people's honest feedback, observations, and desire for positive change as "complaints", that just adds to the overall lack of empathy that we are seeing too much of these days. IMO of course.

I've been here since 2011, so this game means something to me as well. I've been here before Otherworld., before Arena, before pets, before mounts, before fashion, before auction house, before Android, to name just a few. And- importantly- before Daily Rewards. As I said previously, I am nothing special, I've just been around for a while. I totally recognize and appreciate everything that the game developers of OTM and subsequently VR have done for us over the years. No complaints here ha ha. And you're right, other games don't do this necessarily. Which is why I, and many other people I suspect, choose to be here.

So- before this thread offramps into what does and doesn't constitute complaining, I feel like I can set the voting as "one in favor of the new drop distribution, one in favor of a return to tokens". Very many thanks to alleniverson339 for reminding us that this is still a good place to be overall, whatever our feelings on small gameplay issues may be.

Anyone else (either way)? Stay safe!

I am a Guide! If you need any tips/help/advice, Click Here to send me a message!

#7 by FrostByrn
To be honest, I did not like it when the hunter tokens were removed from the daily rewards. But I get it. There are a lot of people that exploit this by making so many toons. But this decision hurt people that do not exploit (players like me), more rather then those who do.

Anyways, let's talk about the replacement items. Travel lix is okay I guess, but I am not so sure about the mount whistle. There are players that do not use mounts, so that might be useless for them. I personally feel that leystone fragments are not the best replacement for tokens, which were very valuable. I don't think a lot of people use those, since you can just buy backpack expansions. And even if they do, they can farm the crookback quest. In my opinion leystone fragments should be replaced with something more useful, like wisdom lix or bounty pledges.

Now, I am not trying to be rude, and I am sorry if it feels like it. I am very grateful for the all the hard work the devs have done and are doing. Daily rewards are freebies, and it is very generous of VR for having this feature, but changing rewards to more useful rewards, in my opinion, wouldn't hurt. That would improve player satisfaction, and people would be looking forward to logging in every day.

2 free daily quest and the old daily rewards, you can get a lot of hunters favour, but do you think its too much.

Instead of complaining, be thankful of these freebies.
Other games dont give freebies like this.

Even when they were still in the daily reward rotation, you were only getting 1 favor, 1 boon, and 1 prize a month. And not everyone does the bounties either, such as when I take breaks from this stressful game, I usually just log on to collect the daily rewards in which I really banked on those tokens being in there. I get that you’re saying they’re free bounties, but it makes it that much of a pain/grind if you want a decent battle mount. And I wouldn’t say it’s generous of them to give us just 2 free bounties a day..big whoop in my opinion.

#9 by Eragon123
Could a simpler solution be to make the mount tokens (that you get from the bounty store) non-tradeable? Maybe the same with some of the other purchaseable items?

I can understand why VR might want to avoid that, since I’m sure players might want to farm bounty tokens and sell the mount tokens (or other items) as another form of income. However, that itself actually seems to be the initial problem here.

Like others have said, taking out one of the two methods of obtaining bounty tokens (which are vital for obtaining pets/mounts for most players) seems rather unfair. I understand that some players have been abusing the system, and this change does fix that, but I feel like making bounty store purchases non-tradeable would be better.


What do others think of that solution? Change the daily rewards back to how they were, but change the items in the bounty store to be non-tradeable.
Have questions about anything? PM me!
Alternatively, you can occasionally find me online in Sulis.
Go team #WorldSkillsUSA2019!
Harbinger of cold hard logic and reason.
Check out the player-run Celtic Heroes Database!: celticheroesdb.com!

Eragon123 wrote:What do others think of that solution? Change the daily rewards back to how they were, but change the items in the bounty store to be non-tradeable.

How would you distinguish pets/mounts obtained from turning in both tradeable and non-tradeable tokens?
46 posts
Post Reply

Users browsing this forum: No registered users and 31 guests

Eragon123
I need to find out how to change my name on Celtic heroes because it was conflicted when they merged Android and ios
Mon Mar 08, 2021 12:56 pm
ryandragon
Thank you regen, I read somewhere previously that some bosses apply a lure on targets when they enrage too. Anyone know
Mon Mar 08, 2021 7:36 am
be0wulf
Also if your a high up player and have all the maxed jewelry and gear nobody really cares too much what you say, if you
Sun Mar 07, 2021 5:29 pm
DeadSilence
I stopped playing for a while but there used to be a iOS version. Now I guess they merged the Android and iOS so my iPho
Sun Mar 07, 2021 4:54 pm